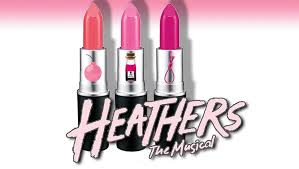 This is NOT the usual family style musical, in any way. Based on a 1988 cult film, it is a show noir.   Suicide, bullying, murder, and more pervade the plot. And in a culture where teen suicide is rising at alarming rates, one may have some concerns about this topic for certain potential viewers. It is not for depressed youngsters or others who have had losses in their families or suffered in their teen years in schools.

Having issued the above warning, I can tell you that Onstage has produced this one with great effort and talent.  Directed by Charlie Miller, with a live band and a cast of 19 players, the show moves quite well.

There are three bitchy girls each named Heather and they are played by Janine DeMichele Baggett, Sarah Watkins and Molly Wiley. They are totally self-possessed in every way. The two jocks are played by Joshua Jones and Austin Basham and Hannah Lake is Veronica, the girl who gets drafted into the Heather’s club.

The score of two dozen numbers is possibly best remembered for the Candy Store number; and you can infer what you wish from the title. Other sordid numbers include Dead Girl Walking, and the Me inside of Me.  It is all about teens trying to find themselves, and their raison d’etre. And, there is some question as to the personalities of two of the boys, as to their sexual preferences or orientations.

Be advised that the show includes some of the 7 words you can’t say on TV, teen sex, fighting and shooting.   But, the bottom line is that most of the audience had seen the film, and enjoyed the stage production.