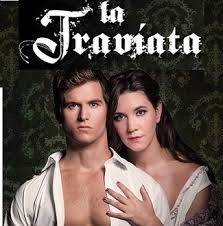 La Traviata
Atlanta Opera
through May 5, 2019

This is one of the world’s most favorite operas. Guiseppi Verdi (or Joe Green in English) was so prolific and he was a crowd pleaser. But, when this one premiered he thought is was going to bomb; but history proved him wrong.

La traviata is a story about a courtesan (Violette, sung by Zuzana Marková) who has left her former calling and fallen in love with a really nice guy from a pretty posh family. Along the way she also just happens to come down with a deadly case of consumption, which killed millions of people in Europe in her day. She looks forward to marrying her Mr. Right (Alfredo, sung by Mario Chang), but when Alfredo’s pompous daddy (Germont, sung by Fabian Veloz) comes on the scene he pressures Violette to give Alfredo up because his daughter is engaged to some up-tight nerd who will not marry her if somebody like Violette is to become his sister-in-law.

It gets a little more involved as Violette succumbs to Germont’s pressures, and later she shows up at a ball back in Paris where Alfredo just happens in. The way she ended the relationship with Alfredo was to brush him off ; and when he sees her in Paris he is really ticked. He owed her some money that she raised for him, and he throws it at her in front of a load of folks in fancy dress and this is considered very insulting to a lady of any position in those days. Violette is mortified. Germont is angered to the max and Alfredo leaves in a huff.

Later, it is learned that Violette is deadly ill and her hours or days are numbered. Germont tells Alfredo what she did for him, and Alfredo rushes to her side. Her doctor, who must have been with the first Parisian HMO does little to help her and as Alfredo finds her, she is at death’s door. Indeed as they embrace the music starts into descending minor chords and you know that ain’t good. She dies in the arms of her one and only true love.

Verdi knew how to grab the audience from the opening notes, and La Traviata is a splendid example of this talent. The principal arias are so easy to recall that if you know Italian you want to sing along to tunes such as Sempre libera. Even if you are not an opera buff, this is a great one as a starter kit. Kind of like Carmen, in that you HAVE TO enjoy it. Great sets, terrific costumes, good choral segments, incredibly smooth score and some terrific voices backed up by a very good cast.

The opera was brought to us with some collaboration with other companies, and with great sets, costumes and choreography and a full orchestra in the pit. It grabs your eyes and ears from note one, and never lets go. The dances of the gypsies and matadors in Act II, are just terrific. And, if some of the tunes sound like their were also in Pirates of Penzance, that’s because Gilbert & Sullivan loved Verdi’s work and they always loved doing parodies of light operas.

Just two final performances at Cobb Energy Center, on May 3 at 8pm and May 5th at 3pm. It is the finale of this season and not to be missed. More info at AtlantaOpera.org