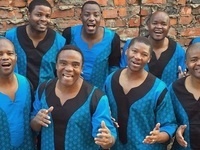 The acapella group, Ladysmith Black Mombazo, from South Africa recently came to town where they performed at the Rialto Center of GSU. This group has performed around the world or 50 years and audiences love their style

Nine singers do numbers, mostly about making the world a more sane and peaceful place; with some doing back up as if they were musical instruments and others handling lyrics. And, some segments are done all as one. The group was founded in 1950 by Joseph Shabalala in Durban.

Most of what they sing is in Zulu, and while you may not see any super-titles, it is the harmony that is captivating. I know that when I first heard them in Johannesburg, that I was floored, and now decades later they haven’t lost a thing; albeit most of the group are not the same as 20+ years ago, But, the show’s the thing, and it surely wows audiences.

These are extremely hard working guys who may be playing on four or more cities in any one week. The played here to a full house which deeply appreciated their performance.

The Rialto is downtown and actually offers free parking at the garage next to their facility. And . . . if you want an evening of riotous laughter, don’t miss out on seeing Capitol Steps who will bring their political humor to town on March 24th. After all the recent news, we could use some comedy.