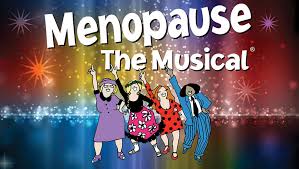 If you didn’t get to see Menopause before, you’ve missed a riotous evening of good entertainment. So, . . . here’s your chance again. They’re back! These four wild women find one another in Bloomie’s and they are each dealing with the changes in life that they knew were coming, but didn’t really enjoy.

First thing I have to tell you is that a lot of guys would be put off by the show title or subject matter. But, it really is not just a chick show. For the guy who has an IQ higher than a politician and understands that women face life changes as they age, it can be just as entertaining as it is for his lady. But, for the guy who’s world consists of watching race car drivers run around in circles it could be a bit like watching a film with subtitles. He wouldn’t dig that, either.

The cast of four wonderfully meshed players consists of Rebecca Fisher as the actress on the way to retirement, Linda Boston as the flower-girl turned business woman, Megan Cavanagh as “Earth Mother” and Teri Adams as the housewife from Iowa. Four distinctly different backgrounds and a perfect match up of ensemble acting and singing.

The score is really unique in that it consists of licensed music mostly from the groovin’ 60’s so you will recall the tunes and much of the lyrics, except that the lyrics in this show are a parody and so have been written to tell the story. The old standard “Heat Wave” which dates from the 1930’s by Irving Berlin now resounds with, “I’m having a hot flash / A tropical hot flash / My personal summer is really a bummer / I’m having a hot flash.”

Take your lady for a very happy evening of fun at the Strand in Marietta Square. And, if you are the lady and that guy of yours doesn’t dig the idea of going with you, call your friends, round up a girls’ night out and enjoy it. You don’t need to be a Red Hat gal, but they sure enjoy this one every time it comes to town.

And there’s free parking in the city garage across the street from the theater. More info at EarlSmithStrand.org