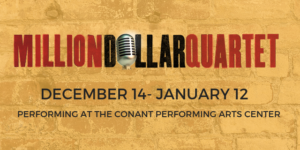 It is brilliant that some of our local theaters now co-produce shows. For the patrons it means they may not have to schlep 20+ miles for a show they wish were closer to home; but for the theatre companies it saves money on sets, costumes, rehearsal dates and more. So this high energy show which started in February last year at the Lyric Theatre, then went to Georgia Ensemble Theatre in April 2017; is now brought back by Georgia Ensemble at the Conant Performing Arts Center at Oglethorpe.. Even if you saw it before, you’ll enjoy it once again with some of the same cast. It’s perfect for right now as it exudes energy and you really want to clap, sing, twist and do whatever . . . .

Sun Records had a pretty basic studio in Memphis. It was the birthplace of Rock & Roll, as founder Sam Phillips put out records for several performers who were destined to soar into fame with their Rock and R&B numbers. He was the first to record Elvis and Johnny Cash. This one-act of total excitement is set at the studio.

A young piano player wants to get his work out. You’ll thoroughly enjoy seeing Sean McGibbon in his role as Jerry Lee Lewis, and he makes those 88 keys really rock. The show is set on December 4, 1956 when four now-famous players wind up jamming at Sun. Carl Perkins (Christopher Kent) and Johnny Cash (Chris Damiano) show up. Carl isn’t too happy with Jerry Lee as back up. Then Elvis (Alex Canty) drops by with his lady friend, Dyanne (Janine DeMichele Baggett).

Sun’s owner, Sam Phillips (Jeremy Wood), has some problems, as some of the guys are going to move on to Columbia Records, regardless that Sam is the one who gave them their first break. The story is about the music, and Sean McGibbon is a hoot on the keyboard, while the other three quartet members really are great on guitars. Dyanne has some numbers to sing, and the gang is backed up by Kroy Presley and James Whitney.

The show opened this week as the first production in a new association between Georgia Ensemble and Oglethorpe, and there shall be more shows coming to them in Brookhaven. It is impossible not to enjoy it and get excited by the music. When selecting your seats try to get on the left side of the house, where you will have the better view of Sean’s playing. More info and tickets at GET.org