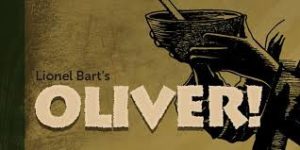 You know a show is a standard when it runs 50+ years, and this one hit the boards in London 59 years ago. Dickens probably would have liked it, albeit Fagin’s antisemitism is toned down these days.

And while you may not recall all the details you know the young lad was in a workhouse, where all they got to eat was some gruel; and he is remembered for holding out his bowl and asking for more. Then he gets sold off to some baddies, and gets trained to pick a pocket or two.

Young Vinny Montague is fantastic as Oliver, and he is backed up by an ensemble of more than a dozen other young performers who do a fine job. You have to think you’ll see them as their careers progress.

Fagin is played by Jeff McKerley, and Heidi Cline McKerley directed this fine cast. The Artful Dodger, who is assigned to tutor Oliver, is played by Colby Howell. And Brian Kurlander comes on in Act II as the dangerous Bill Sikes. Daniel Cook is that meanie, Mr. Bumble; and Jennifer Alice Acker is Nancy, who gets caught up in all the situations.

But, know that even though there could be even more tragic endings at the London Bridge, that at least Oliver survives and there is some very good news breaking for him.

Cristina Dinella had the score timed perfectly and all worked well. You’ll want to quietly sing along to many of the numbers by Lionel Bart, such as Food, Glorious Food at the workhouse, You’ve Got to Pick a Pocket or Two in his first training session, the Oom-Pah-Pah number at the 3 Cripples Pub, and the funny Reviewing the Situation when Fagin contemplates retirement.

The show is fine for ages 8 to 98, and good views from every seat in the house. Plenty of free parking, but try to get there a little earlier for spaces closer to the entrance. This is another star on the banner for staging excellent musical shows. More info at AtlantaLyricTheatre.com