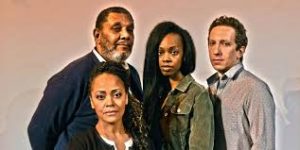 David Auburn’s, Proof, won both a Tony and a Pulitzer when it came out in 2000. This excellent production under direction by Tess Malis Kincaid is set in the Chicago area at a nice home, in need of some repairs, where Catherine lives with her retired father, who was a math genius professor.

The professor, Robert (Gerard Catus) had passed away a week before the scene opens; but Catherine (Fedna Jacquet) sees him coming to her with a bottle of champagne to celebrate her 25th birthday. Catherine has some self-deprecating thoughts about her academic abilities, and has dropped out of college but is now thinking of going back to finish her degree. Robert sees her as being a lot more intelligent that she gives herself credit for.

A former grad student, Hal (Eric Mendenhall), comes to visit as he is searching through many files and note books created by Robert to see if there may be some proof of a theorem on which Robert had been working, that might be published.

Things become complicated when Catherine suspects Hal is trying to steal some of her father’s works and claim credit for himself. Then her sister, Claire (Tinashe Kajese), comes in from New York and wants to take Catherine back to live with her. That is one more stress factor.

The underlying story line is that there is more than just one proof. One proof may be the math which demonstrates an answer to a question and hence becomes a method of proof; while there is also the question of how a woman gets to prove abilities in a male-dominated academic society.

Each of the actors does a great job, and the set by Moriah and Isabel Curley-Clay is absolutely magnificent. The time warps may be a little confusing to some of us; but please know that all does come right in the end and the proof becomes obvious.

Playing at True Colors Theatre at the Southwest Arts Center, you can get more info and tickets at TrueColorsThatre.org