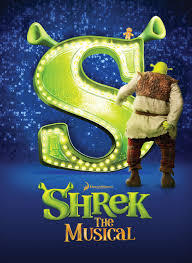 You’ve seen Shrek, the ogre, in one form or another; whether in book, film, or on TV or stage. And while it is a story that may be aimed at younger folks, it never fails to appeal to the kids within us; as we watch what Shrek and Fiona go through in life and recall our own roads we’ve traveled.

David Lindsay-Abaire who brought us quite a few good plays, including Rabbit Hole, crafted this one and tossed in some puns along the way. Ryan Everett Wood comes on just great as the ogre. And, as Kermit would tell you, it isn’t easy being green.

Princess Fiona (Randi Garza) hasn’t had such a great life, either. Like Shrek, her parents haven’t been the most caring and she’s been locked away like a Repunzel. Lord Farquaad (be careful in pronouncing that one) is a despotic piece of work, whose aims in life may be beyond his stature. He’s played to the hilt by Vatican Lokey.

And while Shrek may think he is smarter than some dumb-ass donkey (Quentin Avery Brown) he benefits greatly from the guidance and help of that critter as the tale unfolds.

But they’re not the only cartoon characters in this one. You’ll enjoy seeing Pinocchio, witches, blind mice, three bears, fairy godmother, and others. And, of course, Farquaad has his corp of guards who remind one of Tin Men. The story is of desires, lusts, and since it is a fairy tale, all must come out right in the end; and nobody, not even a Gingerbread Man suffers.

Directed and choreographed by Chase Todd, the costumes, staging and dance numbers are first class. And they do have some great puppetry work when the wanna-be nasty dragon comes on stage in Act II. It is a huge prop that reminds one of some of the work in Lion King. The music is recorded and perfectly managed so that it comes off as if a full orchestra was in the pit. Everything is spot-on as to appearance, timing and production values.

Performances run Thursdays through Sundays, with 8pm shows weekdays and a 2pm matinee on Sundays. The running time is about 2.5 hours, so if you are thinking of bringing the young tots, consider the Sunday shows. More info and tickets at AtlantaLyric.com