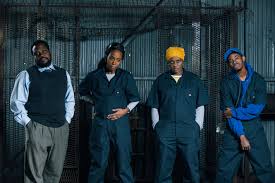 Think back to the days of the depression in 2008, and then reflect upon what may be occurring in some areas even in these days of increased employment rates. For back in 1993 when IBM laid off 60,000 employees, the corporate attitude towards workers went through a change. Prior to then employers and employees had a sense of loyalty, each to the other.  Companies had a PERSONNEL department. But since then they have reformed to HUMAN RESOURCES departments. Inasmuch as employees are now thought of like office furniture. If you don’t need it, get rid of it. If you need another one down the road just go get one.

And so Dominique Morisseau penned this work about some workers in Detroit on the auto lines. Jamil Jude directed the cast of four who we see from time to time in their break room at the factory. Dez (Anthony Campbell) is pretty much a street guy from the ‘hood. Shanita (Asia Howard) is a line worker who is pregnant and trying to stay employed as long as possible. Faye (Tonia Jackson) is another line worker who has gone through great losses and is homeless when we meet her. They all know Reggie (Enoch King) who may have started on the line, but has moved on to management; and he is called upon to keep the industrial peons in line, so to speak.

Reggie comes to know of some impending shutdowns and is told to be silent. But he has a history and cares about those others, so he is in quite a jam. Each has their problems. Loss of assets, impending birth, violation of a factory security code, and more.

The set by Moriah and Isabel Curley-Clay works quite well, and the scenes move easily on a static set. The audience can just imagine what may be going on in some communities, and what the current political quagmire might bring into effect in the coming months. It isn’t one that a big time head honcho would either relate to nor understand. But, for those of us who have worked for a paycheck we get the picture, the story and have concerns for the days to come.

Performed at the Southwest Arts Center, easy to get to off 285, and more info at TrueColorsTheatre.org