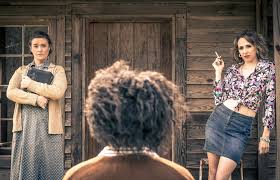 Split in Three
Aurora Theatre
through May 28, 2017

Local playwright Daryl Lisa Fazio has created a really superb work, now playing at the Aurora in Lawrenceville.  The story line is about a couple of sisters in a small town in the Mississippi Delta region in 1969 just after the Supreme Court’s decision requires an immediate end to segregated schools.

The grit of the story is that these two women, Nola (Courtney Patterson) and Nell (Rhyn McLemore Saver) don’t always see things the same way, and they live in a dump of an old house where most of the action takes place.  They start getting calls from someone named Penny (Falashay Pearson) who wants to come visit them.

Things get somewhat stressed when Penny shows up and just happens to be black.  More than that . . . . she’s the half sister to the other two.  The father of Nola and Nell was also the father to Penny whose mother was black.  That wasn’t an easy sell in ole Miss.

Them townsfolk in Yazoo are gittin’ upset about this here school mixin’, and they may not be wearin’ them white hoods, but they sure ain’t helping the black members of their community.  One gal even got burned up recently.

The local Sheriff’s deputy is Tuck (Travis Smith) who is stuck in the middle.  He gotta enforce the laws, but he don’t want to do nuthin’ too bad.  And he got eyes for Nola, big time.

What starts to move the tale along is that it turns out that while Nola and Nell just be average good old gals, that Penny ain’t no dumb belle.  In fact, she’s a biochemist who can read, spell and do a lot of stuff.  A lot more than some local yokels may be able to do.   The young man who lives next door is Clifford (Elijah Marcano) who is a very bright young man, facing a less bright future.  But, Penny sees his abilities and mentors him with great skill.

As tensions rise and townies go nuts, the ladies discover their inner selves, and the story ends in a manner that pleases everyone in the audience.  It is so poignant;  especially making one think of the recent film, Hidden Figures.  Jeez, what a world we was in.  And, where are we heading right now?

Justin Anderson directed this excellent cast, and Jamie Bullins’set works very well.  You think you know these folks and this location, because you’ve seem films, read stories and/or been there yourself.  It is another excellent show from this theatre company.  More info and tickets at AuroraTheatre.com