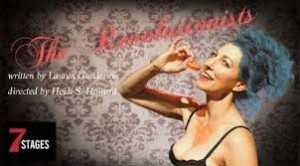 The Revolutionists
7 Stages
Through March 20, 2016

Local playwright Lauren Gunderson has crafted this play which is totally different from Silent Sky of I and You; in that while it deals with life from a woman’s point of view it is rife with comedy against a background of riotous stress.

Ms. Gunderson is quite a researcher. And she told folks how she had been on a visit to Paris when she read about a feminist during the days of the revolution. Her name was Olympe de Gouges, and she was actually a playwright who lost her head shortly after Marie Antoinette lost hers.

The show is a long 105 minute one act production directed by Heidi S. Howard and performed to perfection by four extremely talented actors. We first meet Madame de Gouges (Stacy Melich) who is thinking about where she is going with a play, and having some writers cramps along the way. She is dressed to the nines, as is each of the actors.

She is hanging out with Marianne, (Parris Sarter) who has moved to Paris from the Caribbean colony of Saint-Domingue, which we now know as Haiti. She stands for equality for all; based not only on sex, but race as well. For as hordes of revolutionaries marched to the barricades demanding equality, they seemed to be ignoring the fact that France was enslaving blacks in the colonies.

Rachel Frawley enters the scene as Charlotte Corday, the conservative who had issues with the famed Dr. Jean-Paul Marat. Marat was the outspoken physician who penned so many of the pamphlets which helped to inflame the revolt. Charlotte, plans to off Marat but wants a catch line for her work; as she expects she will mount the platform for the Guillotine soon after her deed be done.

And, of course this would have to have the egocentric Marie Antoinette, played to the hilt by Park Krausen. Even in the days before Kermit, she could tell you that it isn’t easy being Queen.

What is so impressive is how this work weaves in the actual history of events while bringing out the needs of women in those days of yore. And when we look around the world in our time, it seems that the French may be quite right when they opine “plus ça change, plus c’est la même chose.” The more things change, the more they stay the same.

They’re playing at 7 Stages, on the black box stage and to sold out houses, so grab your seats while you can, for it’s a winner. Visit the website at 7Stages.org