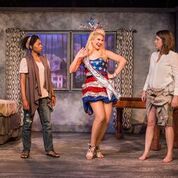 The Taming
Synchronicity Theatre
through June 24, 2018

This is such a time for political drama and comedy. This one is written by the most produced playwright, Lauren Gunderson; and what is amazing is that it was staged first in 2013 before Potus was in the scene. Just think about it; Hamilton shows up while Ben Franklin is in town, and now we find some women activists and George Washington, Ben Franklin, James Madison, and others right at hand.

So here we are in a time of almost total confusion as to who is doing what and why, and where do we stand and what may we expect. Not quite what we expected when we were just growing up. Suehyla El-Attar directs this one with a cast of three female actors. There is a time warp in the play as we start off with Miss Georgia (Caroline Arapoglou) who is a hoot. She may be on the carpet looking to be Miss America, but she has a hidden agendum which is rewrite the Constitution.

So how to get started with such a feat? Take a couple of other ladies prisoner and make them help out. So she grabs on Patricia (Kelly Criss) who is the top aide to an egotistic far right southern Senator. Then Patricia gets into it face-to-face with Bianca (Jimmica Collins), who has a far different view. She’s far left wing and into tweeting. Any of this resonate with you yet?

The show is one continuous riot with plenty of arguments, and it makes you really start to think more about the rights of the average person, especially the women. And you will love Bianca’s involvement in her version of the NRA. It is not what you might expect; but just go there expecting an evening of totally first class entertainment.

The sets, costumes and every aspect are totally first class. The theatre is located in the Invesco Center at 1545 Peachtree St. You can also buy a reduced price parking pass if you park in the garage behind the building.