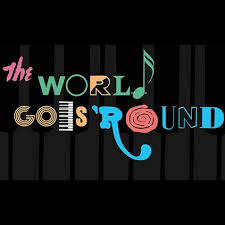 The World Goes ’Round
Lyric Theatre
through November 5, 2017

This is a large scale cabaret type of show which presents man of the musical numbers composed by John Kander with lyrics by Fred Ebb. You recognize many of them from shows such as Funny Lady and Chicago; but unless you are a real theatre and film fan there will be some you may not recall; as this team did a lot of work and not every show was a smash hit.

A really good cast of nine deliver up 30 numbers, including such favorites as All That Jazz, Cabaret, Money-Money and New York-New York. The 6 member orchestra is upstage under the direction of S. Renee Clark. And the lead singers include Mary Nye Bennett, Deborah Bowman and Adrianna Trachell with Jeff McKerley and Brad Raymond. There are constant costume changes, some neat dance segments and even a special number from the show The Rink.

This show is also unique in that Ricardo Aponte not only did the choreography but directed this one.

There is no story line,as it is strictly a musical cabaret of very entertaining numbers presented with aplomb on a very workable and posh stage setting. More info is available at AtlantaLyricTheatre.com