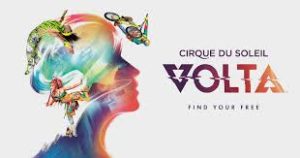 Cirque is back in town under their Grand Chapiteau at Atlantic Station, and this is a longer run than usual going through the holiday season into next year. Volta is a bit different than many of the previous productions, in that the theme may be a bit obscure to many; but as the Bard had opined, the play’s the thing.”

The stage is devoid of a setting, per se, but the acts still come out with plenty of acrobatics, trampoline play and the best bike runs and jumps you’ve ever seen. Good enough to make Evel Knievel jealous, were he still with us. There are some clownish skits as the cast changes costumes and they get some huge props ready to push onto the stage. There’s no high wire or slack wire stunts; but no shortage of excitement as they work through 14 scenes.

The costuming and make-up is not the usual. But, the action and excitement surely is. A cast of a couple of dozen performers, mostly from Eastern Europe and Asia, works the house very well. And what the story line is supposed to be is about the journey one man takes to find himself, and how to make others see you as you are. Not easy, especially if you’re running for office these days.

There are a mass of online references and images if you Google the show. And, you may even learn that Volta, for whom the common electric measurement is named, was an Italian physicist named Alessandro Volta, ergo the title for an electrifying experience.