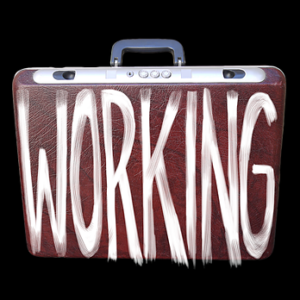 Back in 1974 Studs Terkel wrote a book based on interviews with loads of ordinary working folks. It was Working: People Talk About What They Do All Day and How They Feel About What They Do. A few years later Stephen Schwartz and Nina Faso took the story line and created this musical. It had a very brief run in NYC in 1978, but has been produced in many other localities in the past 40 years; because in reality while we think things may have changed, maybe they haven’t changed that much.

So you get to journey back in time with a dozen actors who sing their way through their work and ordeals. The 14 numbers they present in a cabaret fashion include numbers by workers who are delivery drivers, truck drivers, housewives, cleaning ladies, a stone mason, corporate executive, millworker and others.

Some of the numbers are by two composers who have heard of quite a bit. Lin-Manuel Miranda from Hamilton and Stephen Schwartz who did Godspell and other works.

Kristen Storla directed this one with music direction by Annie Cook. It is done on a thrust stage setting with seats on three sides, and every seat has an unobstructed close-up view.

This one is a very energetic production in which player gives it his/her all, be in solo or in chorus. More info at OutOfBoxTheatre.com